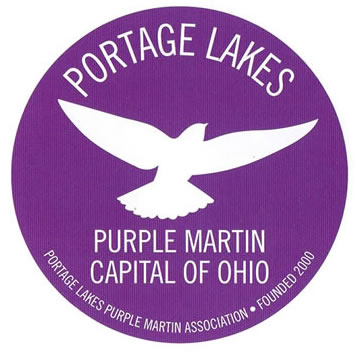 The Portage Lakes Purple Martin Association needs your help! Due to COVID-19, they had to cancel the two fundraisers that keep the organization afloat – MartinFest and the Nimisila Migration Boat Tours.  They appreciate your kind donations!

Graceful in flight, musical in its pre-dawn singing, these birds are the custodians of Portage Lakes. They return from Brazil every Spring and are an awesome insect control patrol. We have many sites around Portage Lakes with a total of over 400 potential nests for our birds!

Martin housing has a long history: although almost all Purple Martins in the east now nest in birdhouses put up especially for them.  some Native American tribes reportedly hung up hollow gourds around their villages to attract these birds. Purple Martins migrate to South America for the winter, but before leaving, they may gather to roost in groups of thousands in late summer.

Purple Martins are dependent on humans, especially in the cold weather that occurs when they return in the spring. An estimated 95% of Purple Martins east of the Rocky Mountains nest in man-made housing. Without human intervention, Purple Martins would face extinction in as fast as 2 years.

Volunteers help sustain the population in many ways. They flip scrambled eggs into the air to feed the birds throughout the season to supplement feeding when the weather interferes with their natural feeding habits. They are treated to spectacular acrobatic displays found nowhere else in nature as the birds spiral and swarm for the airborn eggs! They also remove predator nests and treat the nests so the newborns stay bug and mite free.

In August, the annual migration ritual begins when thousands and thousands of Purple Martins roost in reed beds at Nimisila Reservoir. Starting in September, they migrate over 5,000 miles to South America – flying as far as 300 miles per day.

We are proud to play a part in the sustenance of the species, and hope you continue to enjoy our PLX Purple Martins! 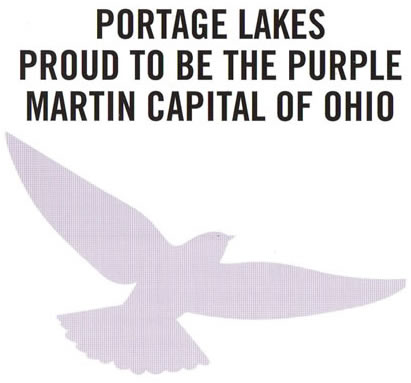